When it comes to camping at the Coachella Valley Music and Arts Festival, accommodations run the gamut from a ratty blanket in the back of a car to a set-up that could rival most apartments.

Inflatable couches and coolers stocked to the brim with cold cuts and cool brews are one thing, but some people at the campgrounds operate with one motto — go big or go home.

Some of these people shared with The Desert Sun how they turned their small campsite into something that is totally unique. 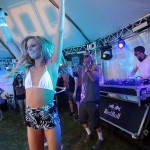 Can you find the weasel?

The first thing you think when approaching Chris Alvarez and his friends’ tent is, “Is that a hamster?”

It’s actually a weasel, and seeing its face fluttering on fabric atop the campsite’s giant flagpole means you’re in for a good time at Weaselchella.

Weaselchella is named for Alvarez’s brother, who they explained, is the weasel. Enough said.

Inside the military-style tent is a fully functioning DJ booth, which really gets going around midnight when the festival lets out.

“This is where the magic happens,” Alvarez said, gesturing around the tent.

Generators aren’t allowed in the Coachella campgrounds, but the friends have found a secret way to power their tent and keep the magic going far past closing time.

Flicking through pictures on his phone, one friend shows pictures of Thursday night’s impromptu show. The crowd stretches as far as the eye can see.

“Each year it just keeps getting bigger and bigger,” Alvarez says, smiling. 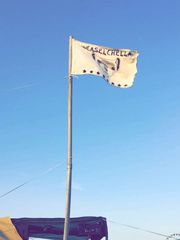 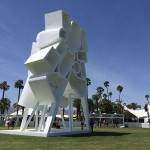 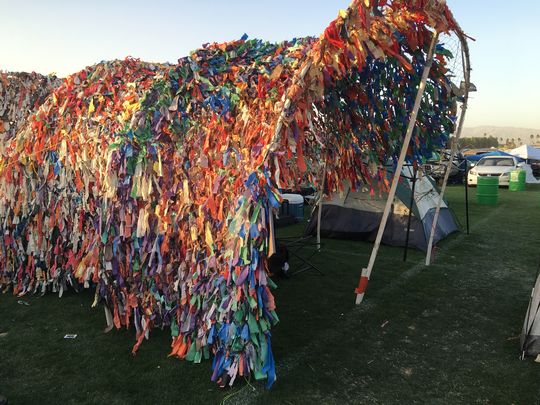 A group of friends camped out for the first weekend of the Coachella festival in the Monkey Hut, which has thousands of pieces of fabric tied all over it. (Photo: Anna Rumer/The Desert Sun)

A Quonset hut made of thousands of fluttering rainbow fabric strips is the only way to camp for Rob Ward.

The Monkey Hut, as the structure is known, has been to Coachella and Burning Man tons of times, and it always causes a stir, Ward said.

His friends made it years ago, painstakingly tying each piece of fabric by hand onto the pipe and net structure.

But where is all the fabric from?

A visitor to the monkey hut can pick up a peanut butter sandwich, a beer or a handful of chips on their way to a set, Ward said.

“Just the snackables,” he said, “the quick in and out so we can get in and out of the concert.”

Not everyone has the patience to tie a thousand knots, however. Others go the more traditional route with a tricked-out hippie van.

The psychedelic 1969 Volkswagen van housing Joshua Tree resident Jason Lopez and his friends has made the festival circuit itself.

Outfitted with a bed, Mr. Potato magnets, crystals and beads, the interior of the van matches the bright dancing skeleton paintings on the exterior.

“It’s very comfy,” Lopez said. “It’s great. Me and my buddies just come up here to have a good time.”

It even helped the group win the Carpool-chella contest this year, garnering them all free VIP and backstage passes.

The guys were looking forward to seeing Guns N’ Roses and A$AP Rocky, but were currently crowded around the van, drinking red wine and beer while playing cards.

“It don’t get no better than this,” Alvarez said.

Anna Rumer covers the Eastern Coachella Valley for The Desert Sun. She can be reached at (760) 285-5490, anna.rumer@desertsun.com or on Twitter @AnnaRumer. 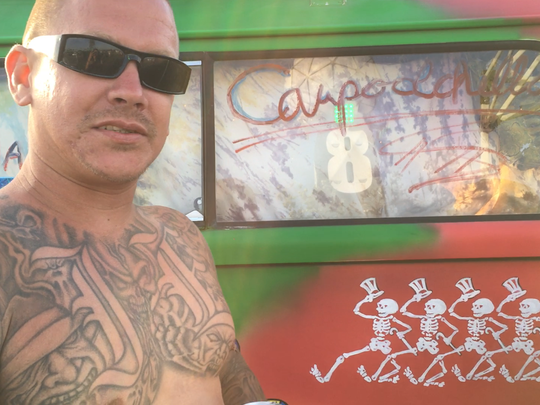