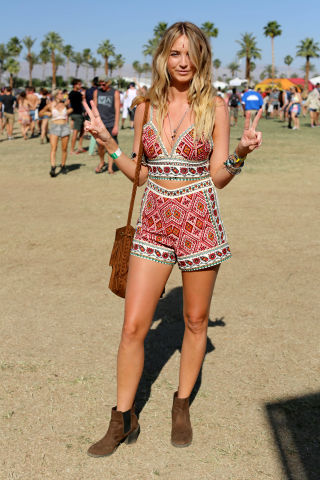 More than just a music festival, Coachella is also a fully formed aesthetic and a whirlpool of commercial potential.
Photograph by Rachel Murray / Getty

I’ve never been to Coachella, and yet it surrounds me at all times. Coachella is a music festival—and now an enormously profitable one—but it is also a fully formed aesthetic, a lightning rod of aspiration, a way of being.

The inaugural Coachella took place in 1999, but its origins extend further back. In 1993, Pearl Jam, in protest of what the band felt were exorbitant Ticketmaster surcharges—remember when surcharges were novel enough to stoke ire?—held a concert in a non-Ticketmaster-controlled space: the Empire Polo Club, in Indio, California. At the time, the outdoor desert venue had never held a rock show, and this event served as a kind of test and a precursor to future events there. Coachella would be among those future events. Founded by a man named Paul Tollett and his events company, Goldenvoice, the first Coachella drew a crowd of about twenty thousand people each of its two days. Goldenvoice lost close to one million dollars on Coachella during its first year, and went dark the second year. The struggle didn’t last long—the festival returned in 2001, and in 2004 tickets for the festival sold out for the first time.

By 2012, Coachella had become so popular that Goldenvoice instated a second weekend of the festival. (The same lineup performs two weekends in a row.) Last year, the festival broke its attendance record, selling just shy of two hundred thousand tickets, for a record-breaking eighty-four million dollars total. This year’s festival, which takes place this month, reportedly sold out an hour after tickets went on sale. Never mind annoying Ticketmaster surcharges—general-admission tickets went for three hundred and ninety-nine dollars; V.I.P. passes sold for eight hundred and ninety-nine dollars. If these ticket prices don’t indicate Coachella’s target demographic clearly enough, maybe this will: a few weeks ago I received a press release from the startup JetSmarter, announcing its first-ever private-jet shuttle service to Coachella from Los Angeles and Bermuda. These private-jet rides exist for festival-goers looking for “a quick, convenient way to head to the valley this year,” the message coolly declared. The Web site EliteDaily, an online playground for the proudly entitled, recently posted a piece offering its readers some Coachella wisdom: “Here’s How to Camp at Coachella Like a Complete Boss.” (Step 1: Stay Somewhere Fly.)

The grandest-scale and most well-known festivals typically strive to idealize something, even if that something is nothing more than debauchery. Woodstock had peace and free love (and then, during its 1999 reincarnation, it had fire and rage). Lilith Fair had touchy-feely inclusivity and feminist solidarity. Burning Man, the subject of much mockery and debate, has a self-described spirit of “radical self-reliance” and, more recently, techno-utopianism. Mardi Gras has its booze and beads and Big Easy traditions; Electric Daisy Carnival its glow sticks and bass and spring breakers. Coachella, on the other hand, is a much more vague, diffuse kind of beast—it is an aestheticized striving for desert hippiedom, divorced from any ideology. Viewed collectively, even its lineups form a generic, apolitical group. In the festival’s early years, Coachella headliners included the Red Hot Chili Peppers, Jane’s Addiction, and Oasis. The festival was a monument to the post-grunge period, when hard rock still held water in the mainstream. Free from the constraints of a firm identity, Coachella evolved as trends in music did. Eventually it grew to incorporate more hip-hop and dance acts. (Jay Z, Muse, and Gorillaz headlined in 2010.) There is not much of a thread to be drawn through its lineups, but Coachella has always maintained a kind of agnostic cool, billing headliners ever-so-slightly left of center so as to seem faintly countercultural, and supporting acts diverse enough to satisfy anyone’s taste.

Not that the performances are the main draw. Because of its proximity to Los Angeles and its noncommittal brand of hipness, Coachella has become a site of celebrity pilgrimage, providing it an air of glamour not typically associated with extreme heat, dust, and physical discomfort. Coachella is the only music festival where you might get a chance to see Rihanna, not a scheduled performer, smoke a blunt while riding atop her security guard’s shoulders. Or Kate Bosworth and Selena Gomez roaming among civilians, sporting floral dresses, or Jared Leto in zebra-print skinny jeans. Coachella is certainly a place to see live music, but it is also a place to witness a ritualized parade of beautiful people embracing their inner bohemians for a few days. From a distance, it looks less like a haven of free-spiritedness than a catwalk of people who have decided that free-spiritedness looks good on them. In other words, it’s a whirlpool of commercial potential. So much commercial potential that Goldenvoice has launched a New York installment of the festival called Panorama, to be held on Randall’s Island in July.

If Coachella does have one marker of identity, it is clothing. For women, this is a highly specific and much-derided uniform of cutoff denim shorts, long flowing dresses, and culturally insensitive headdresses. These aesthetic signifiers of bohemia have become so aligned with Coachella that retailers now use Coachella in product descriptions to stoke buying impulses. A search for “Coachella” on ASOS, the popular e-commerce site, pulls up a collection of fringed garments. H & M (a Coachella sponsor) has launched its own “Coachella collection”—marketed to festival attendees and non-attendees alike—also with many fringed pieces. On Etsy, a “Coachella” search surfaces more than twenty-four thousand results, the pages of which could serve as satire of a festival-wear guidebook: denim cutoffs, jangly ankle bracelets, crocheted cropped halter tops, aviator sunglasses with mini plastic daisies affixed to the rims, tie-dyed fanny packs, and an excess of flower crowns. Largely thanks to Coachella, flower crowns have become so ubiquitous that Courtney Love has written them off altogether: “Flower crowns are over. Fuck flower crowns,” she told Style.com in 2014. The Coachella audience seems undeterred. There’s even a flower-crown filter on Snapchat.

Certainly, at some point many years ago, Coachella-goers must have been striving to capture something they found seductive—maybe the idealism of Woodstock, or the promise of liberty in a remote desert. These desires, it seems, are mostly expressed through wardrobe choices designed to approximate a flower-child mind-set. Now these approximations themselves are so distinct that Coachella attendees—and young people at large with disposable income—seem to desire nothing but the festival’s own sensibility. Which seems deeply silly, yes. And yet it would be a waste to lament Coachella as a moneyed and hollow representation of counterculture. (For one thing, the corruption of counterculture is a ship that has long sailed.) In fact, at a time when we are being encouraged to ascribe world-changing ambitions to each and every mundane thing we do, Coachella’s desires are hearteningly pure, simplistic, and self-contained—which may be even a little bit radical.